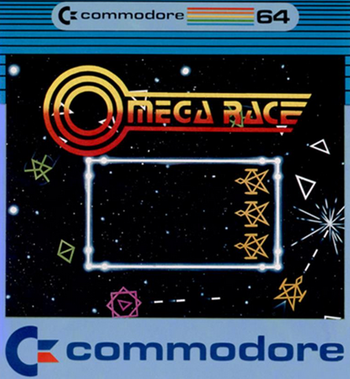 Omega Race is a 1981 arcade game programmed by Ron Haliburton and manufactured by Bally/Midway. It was ported to the Atari 2600 (which came with a special Booster Grip joystick adapter), the ColecoVision, the Commodore VIC-20, and the Commodore 64.
Advertisement:

Set in the year 2003, the game involves using a spaceship to destroy enemy droid ships. The player's ship is controlled using a spinner to rotate the ship's direction, a button for thrusting, and a button for firing lasers. The enemies that the player must destroy or avoid are drone ships, commander ships, two types of space mines, and shooting star ships.