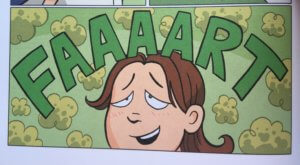 Truly the lowest form of humor.
Here's a good question: since Smile and Sisters are chock-full of laughable bits, why can't this third memoir follow such a trend, either?