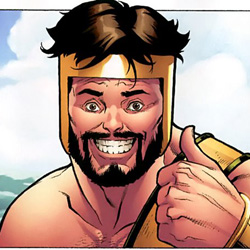 This page is Herc approved.
Advertisement:

Never was the word "comic" more appropriate than in these scenes.