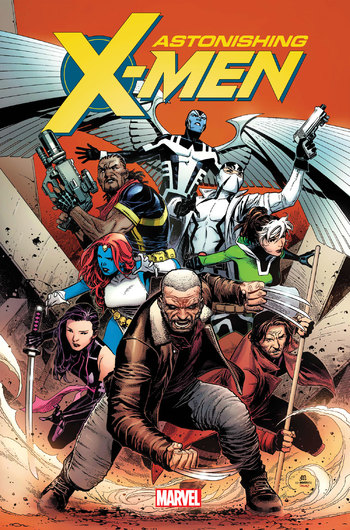 Astonishing X-Men is a comic launched in 2017, initially written by Charles Soule, with a rotating line-up of artists.

After winning their war against The Inhumans, the X-Men have led mutantkind to its healthiest status in quite some time. Though Professor Charles Xavier is still dead, they're no longer in danger of extinction. But they aren't safe, either.

When an ancient evil attacks the world's telepaths and psychics, a group of X-Men past, present, and future —Old Man Logan, Psylocke, Rogue, Gambit, Bishop, Fantomex, Archangel, and Mystique— band together to stop it before it can bring the apocalypse.

But little do they know, a familiar face is using them as pawns in a high-stakes game that will have substantial ramifications for the X-Men moving forward...

Soule's Astonishing is notable for featuring Rogue's return to the X-Men, following a years-long run in Uncanny Avengers, as well as the return of Charles Xavier to the land of the living.

After the conclusion of Soule's run, Astonishing continues with a new creative team (writer Matthew Rosenberg and artist Greg Land) starting with issue #13. This iteration of the title features Dazzler (also making her return to the X-Men after brief stints with S.H.I.E.L.D. and A-Force), Havok, Beast, Colossus, and Warpath. The Reavers have returned with a new weapon, and it's up to this new team to stop them.