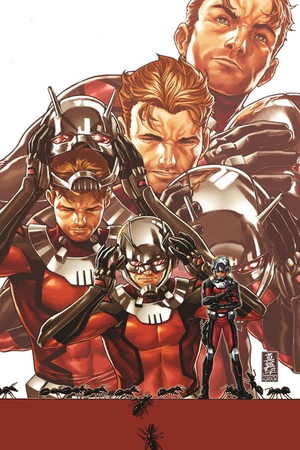 Do you want ants? Because that’s how you get ants.
Advertisement:

Astonishing Ant-Man (originally just Ant-Man) is a 2015 Marvel comic book written by Nick Spencer (Morning Glories, The Superior Foes of Spider-Man) with art by Ramon Rosanas, published as part of the "All-New, All-Different Marvel" initiative that sprung from the aftermath of Secret Wars.

It features Scott Lang, the second Ant-Man (and focus of his 2015 movie) as he moves down to Miami, Florida to be closer to his recently-resurrected daughter Cassie, starting a security solutions firm while there. Oh, and Scott's starter villain Darren Cross has been revived by his vengeful son, so that's kind of an issue.

Originally published in January 2015 for the "Avengers NOW!" branding (without its "astonishing" adjective), this series had an initial run of five issues, an annual, and a one-shot prelude to Secret Wars, ultimately returning from hiatus in October 2015 with the previous creative team intact.

Now titled Astonishing Ant-Man, it picks up eight months from where it left off — namely, with Scott and his employees (and fellow reformed criminals) Grizzly and Machinesmith providing their services to a retirement home for golden age superheroes led by Mary Morgenstern, the former Miss Patriot. It also turns out he's presently estranged from Cassie, as to avoid putting her in harm's way — and that he's telling the story in flashback from prison.

As for what Hank Pym —the original Ant-Man— seems to be doing these days, well ... let's just say he's feeling a bit disconnected from humanity at the moment.