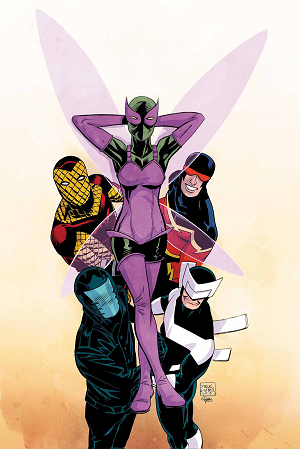 "Is this some kind of sex thing?"
"Why would it be a sex thing?"
These guys, right?
Advertisement:

Boomerang and the Sinister Six — which only has five members — are a gang of no-name bad guys trying to make it big as super villains. Incompetent and dysfunctional at best, the group spends most of their time committing petty crimes to keep the lights on and bickering amongst each other. However things take a turn for the strange when the gang gets a bizarre opportunity; a chance to make a fortune by stealing a priceless portrait of Doctor Doom—without his mask. Problem is the mob and other supervillains are after the portrait too and superheroes are trying to arrest everyone. Soon the wannabe villains find themselves in a madcap race to recover the portrait and fulfill their dreams.

Debuting in July 2013 as a part of the Marvel NOW! initiative, The Superior Foes of Spider-Man is a spin-off to Superior Spider-Man. Written by Nick Spencer and drawn by Steve Lieber, it quickly became notable and acclaimed for its comedic style, use of obscure heroes and villains, and examination of the concept of supervillains. The book ended with issue 17 in November 2014. Spencer's run on Ant-Man, beginning in 2015, serves as a sequel of sorts to the book, picking up with several characters after the events of this series.

"I heard their sixth member is Thanos."
"It's obviously Dormammu."