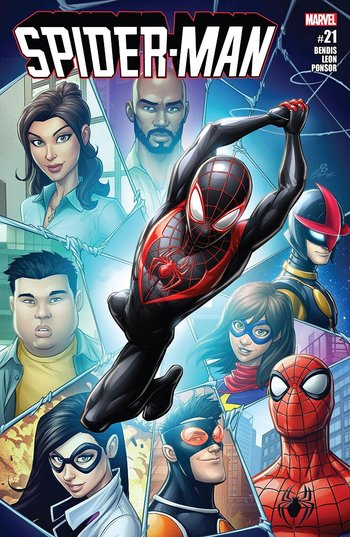 The adjectiveless comic book "Spider-Man" released in 2016 starred Miles Morales, and it was his first solo comic in the Marvel Universe, instead of the Ultimate Marvel one. It takes place after Secret Wars (2015), where the Molecule Man showed gratitude to him by transferring his family and friends to the prime universe, the only universe restored immediately after it (many more universes, including the Ultimate one, would be restored later).
Advertisement:

The Comic Book Run is written by Brian Michael Bendis, with the art of Sara Pichelli, the same creative team that managed Miles in Ultimate Spider-Man. The comic is the second volume of the adjectiveless "Spider-Man" comic, and by the time of issue #22, it resumed the original numbering as #234. The comic lasted until issue #240.

In this comic, Miles interacts with the Avengers and the Champions, and faces the fallout of the Civil War II. His family and friends are also there, including his mother Rio Morales. He also met Spider-Gwen, the Spider-Woman from another universe. Eventually, it is revealed that his uncle is also back...