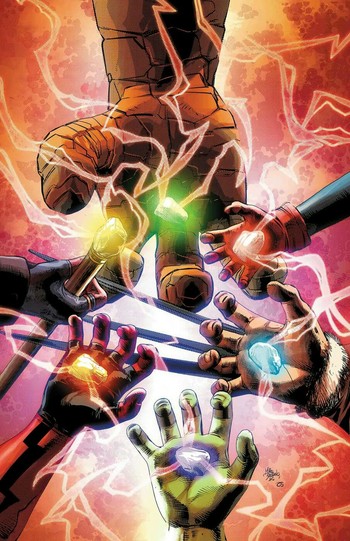 Infinity Countdown is a 2018 Marvel Comics event spinning out of Gerry Duggan's Guardians of the Galaxy run, and is the cumulation of various plots that were planted as early as his Nova and Deadpool runs from 2012.

Several years ago, the Infinity Gems were destroyed, in an attempt to save the Earth from destruction. Over the last few months, the newly reconstituted Infinity Stones have been reappearing across the universe, often in less-than-savory hands seeking to use the Stones and their power for their own aims. But there is more. Something else is coming. Something worse... The universe is counting down to the end, but what is the cause?

Infinity Countdown leads immediately in to Infinity Wars in July 2018.