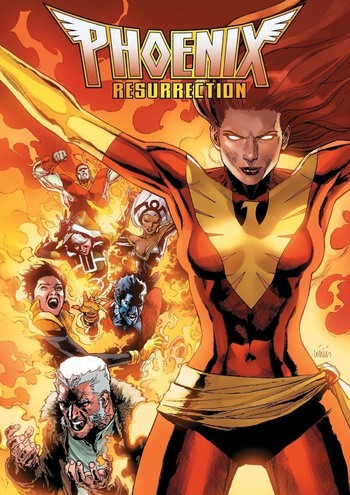 Phoenix Resurrection: The Return Of Jean Grey is a five-issue limited series published by Marvel Comics, written by Matthew Rosenberg and drawn by Leinil Francis Yu for the Marvel Legacy branding initiative.

As you probably guessed by the title, Phoenix Resurrection features the revival of its titular heroine (the original one, not the time-displaced teenage one), who was Killed Off for Real in New X-Men #150.

Rachel Summers — Jean's daughter with Cyclops from a bad future — and the time-displaced teenage Jean factor majorly into the story. The latter's ongoing title, Jean Grey, will also have a tie-in issue.

Phoenix Resurrection: The Return Of Jean Grey contains examples of the following tropes: