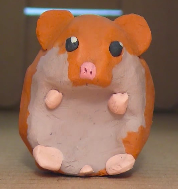 "What are you doing? Can you not talk to me?"
An 8 episode claymation web animation series, Hamster Hell is about a boy who takes care of his hamsters while keeping them under his bed, hiding them from his family. Sounds like it could be cute, right?

Hamster Hell is an adult horror series made by Lee Hardcastle, who is known for making adult claymation videos. The first episode of the series, Arrival, aired on October 5th, 2011. Episodes started airing without a regular schedule, but were released every 3 to 4 weeks on average. The final episode, Death, aired on March 8th, 2012. A full compilation was released a few months after, in June 12th, 2012.

The whole series playlist can be found here

, or you can watch the normal compilation, which is here.