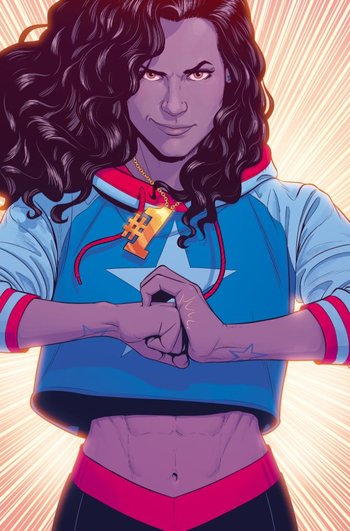 Raised in the extradimensional Utopian Parallel by her two mothers, America is a multiversal traveler who ran away from home after Mrs. and Mrs. Chavez sacrificed themselves to save their universe.

Upon leaving the Utopian Parallel, one of her first major acts as a crimefighter came through joining the Teen Brigade, with whom she prevented the Young Masters of Evil from disrupting Chaos and Order. She also had a fling with the Ultimate Nullifier, which quickly ended due to irreconcilable differences between them.

Not much longer after her tenure with the Teen Brigade, she joined the Young Avengers to protect Wiccan —the future Demiurge— from Kid Loki, who'd previously approached America about killing him before he could devolve into the Demiurge persona. During this time, she began a close friendship with teammate Kate Bishop —AKA Hawkeye— and continued to serve on the Young Avengers, up until the collapse of the Marvel Universe.

In the wake of Earth-616's incursion with Earth-1610, America now existed on Doctor Doom's Battleworld in the Arcadia region. In this reality, America served as a member of A-Force, their amazon brigade of Avengers, and was also the foster daughter of Lady Loki and foster sister of Nico Minoru. Upon breaking one of God Doom's laws, she was sent to The Wall as punishment, but ended up joining Abigail Brand's secret siege against their ruler, alongside the Robin Hood-esque Lady Katherine of Bishop.

When the Marvel Universe was restored, America joined The Ultimates alongside Captain Marvel and Black Panther, working to take on cosmic threats to the multiverse. During the second Civil War, America went against her Ultimates leader and took Iron Man's anti-future profiling side, much to Carol's chagrin.

As part of Marvel NOW!, America headlined her first ongoing series —simply titled America— which followed her adventures as a multiversal college student.

After her solo adventure, She accepts Kate Bishop's invitation to join the new version of the West Coast Avengers as part of Marvel: A Fresh Start.