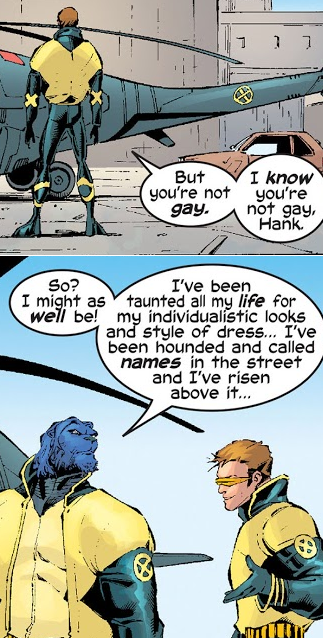 Guy 1: All X-Men are totally queer!
Guy 2: Huh..?
Guy 1: When they're teens they start realising they're "different". You can't tell who's a mutant and who isn't. And there's douches who wanna take away their rights and shit!
— Rooster Tails

This character is different. There's something about them, something that has a huge impact on their life and shapes who they are, but they have to keep it a secret. If anyone finds out they could be rejected by their loved ones, socially ostracized, or worse. They might hate this part of themselves and just want it to go away or they might embrace it and lament the fact that no one can ever know.

No, they are not gay. Why would you even ask that?

They have superpowers. They have magical powers. They can talk to animals or ghosts. They're not queer but something sets them apart from everyone else in their life in exactly the same way that being queer would. It feels like someone wanted to talk about it without actually talking about it.

The result is a story that looks suspiciously like a Coming-Out Story or a story about being outed or dealing with homophobia or accepting yourself even though it's ostensibly about something else. The character may be Ambiguously Gay or Ambiguously Bi, but you can bet they have a huge LGBT Fanbase. The trait that mimics sexual orientation will usually be magical or supernatural in nature and will often be something that those around them have a legitimate reason to fear, leading to Unfortunate Implications.

These stories will always involve a secret about the character that, if it's revealed, could have serious consequences. Other indications that this is happening often include:

In self-contained media, such as a movie, that uses this trope, the story often begins with the character being "outed," leading to ridicule that sees the character at their lowest point. The character must then learn to accept themselves and use their power or ability to save the day, and the movie ends with their loved ones accepting them too. In longer-running media like TV shows, the character is more likely to completely accept themselves from the beginning and have some other reason to want to keep everything secret, inevitably leading to drama when other characters come close to finding out.

When done intentionally, this can allow a creator to explore queer themes in situations where queer characters aren't allowed or without alienating a conservative audience. When done unintentionally, it can make for some entertaining cell phone footage of flustered creators trying to answer unexpected questions about sexuality at cons.

Compared to Fantastic Racism, where a fictional species is used as a stand-in to talk about problems faced by people of color, and Have You Tried Not Being a Monster?, where any group of fantasy creatures or people with powers are used as a stand-in to talk about any marginalized real-life group, this trope is usually used on a more individual level. The character may be the only person with their power or ability that they know of, and if they are part of a larger community, the work will often focus more on their personal journey towards acceptance rather than the overarching societal repercussions.

Also similar to Gay Aesop and But Not Too Gay. Subtrope of Applicability.