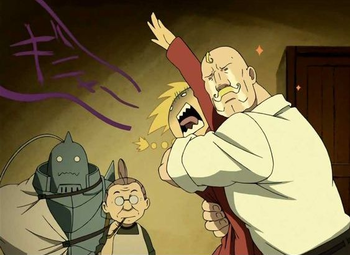 "These tears have been in the Armstrong line for generations!"
"Hither came Conan the Cimmerian... a thief, a reaver, a slayer, with gigantic melancholies and gigantic mirth..."
— "The Phoenix in the Sword" by Robert E. Howard
Advertisement:

Oddly, it is understood that, while Men Don't Cry, the biggest, strongest guys are allowed more leeway in this respect than the average man or the hero. Perhaps because he was so tough nobody ever called him a "wimp" or "crybaby", so he was never bullied into hiding his emotions like others. Maybe it's just cultural: Russian or African society may value stoicism less than, for example, the uptight British, so that the Scary Black Man and the Husky Russkie can show their grief more openly than the Eaglelander or the Quintessential British Gentleman. Maybe it's just that big guys are generally uninhibited. Maybe it's something to do with the sensitive tough stereotype. Whatever; The Big Guy and/or the Boisterous Bruiser gets to cry more with less loss of credibility than other men.

Also, big bruisers are allowed to have a soft spot for children. Partly this is to make them less frightening. The other, more worrying part is that it seems safer than allowing normal-sized men to like kids. Does he know his own strength?

They are also less inhibited about a Man Hug, though your ribs may regret the experience after.

Sub-Trope of Bruiser with a Soft Center. Contrast Sensitive Guy and Manly Man where the traits are divvied up. See also Gentle Giant, Real Men Wear Pink, and Manly Tears.