Literature / The Phoenix on the Sword 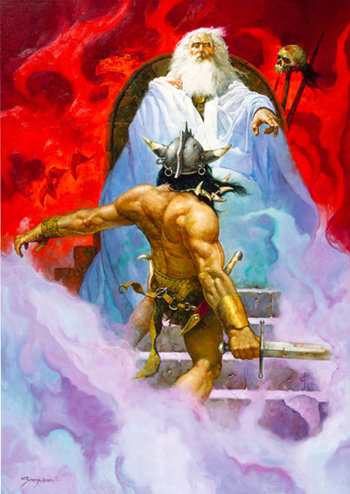 "The Phoenix on the Sword" by Robert E. Howard is the first Conan the Barbarian story, first published in December 1932.

There is a conspiracy afoot to overthrow Conan, the new king of the prosperous nation of Aquilonia. The Rebel Four, disparate leaders who each want Conan dead for their own reasons, have been brought together by Ascalante, who seeks to use them as part of his own bid for the crown of Aquilonia. Ascalante's chiefest slave is Thoth-Amon, once a powerful sorcerer of Stygia who seeks his lost ring of power.

Meanwhile, Conan has been restless ever since taking the throne, yearning for the days when he was a warrior. When Thoth-Amon reclaims his ring and calls forth a powerful demon from the underworld to destroy his master, the dead sage Epemitreus calls Conan to him to protect his land from this evil foe, and places the mark of the phoenix on Conan's sword. Thus armed, Conan destroys both the demon and the conspirators that have come to his chambers to assassinate him.

The Phoenix on the Sword contains examples of: