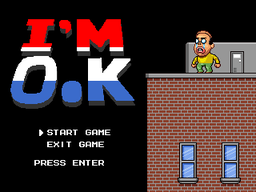 I'm O.K - A Murder Simulator is a freeware Beat 'em Up platformer game created in 2005 by Derek Yu and others in response to Jack Thompson's

"A Modest Video Game Proposal", a letter in which he asked the Entertainment Software Association to create a videogame involving the mass murder of videogame industry employees. Thompson claimed that he would donate $10,000 to a charity of Paul Eibeler's (former chairman of Take-Two Interactive, a company heavily criticized by Thompson) choosing if such a game were made.

This game involves... well, rampant cartoonish over-the-top violence against video game industry customers, vendors, developers, and executives. In the course of several levels the main character, a distraught father named Osaki Kim (O.K. for short) whose son perished in a videogame-induced shooting, goes on an angry rampage to avenge his son's death.

As a footnote: Thompson later reneged on this promise, saying that the game had to be commercially published and sold. He later even tried to sue Penny Arcade when it donated the $10K in Thompson's name to the Entertainment Software Association Foundation charity.