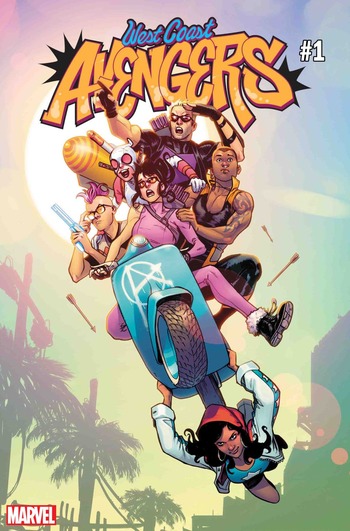 West Coast Avengers is a 2018 comic series sharing the title and basic premise of the 1985-1994 comic series of the same name, written by Kelly Thompson (who previously worked on Hawkeye: Kate Bishop) and drawn by Stefano Caselli, Daniele Di Nicuolo, and Gang Hyuk Lim. It's part of Marvel Comics' Fresh Start initiative, and ran for 10 issues from August 2018 to April 2019.

This team consists of:

The basic premise is that Kate Bishop, having operated on her own in Los Angeles for a while, has noticed that the famously meta-lite city has been invaded by supervillains looking to make a name for themselves in the comparatively less competitive market. Realizing she can't do this all by herself, she enlists the help of anyone willing to join. Thankfully, she's made some friends in the past, and some heroes out there are looking to get big.

The only problem? They don't have any money. To alleviate this, they must also take part in a reality TV show where they live under the same roof. Hijinks ensue, naturally.