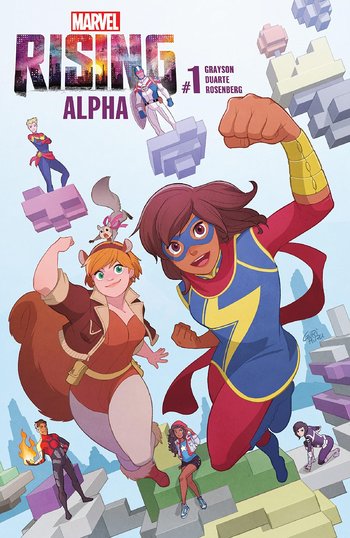 "Team-ups can happen anytime, anywhere — and they're awesome."
Advertisement:

Marvel Rising is a 2018 five-issue limited comic series that serves as the first entry in the Marvel Rising franchise. Unlike the animated entries of the franchise, which are set in their own continuity, the comic series is set in the mainstream Marvel Comics continuity. It tells the story of how Ms. Marvel and Squirrel Girl first met and had their first team-up adventure.

The comic starts with Doreen Green, who has recently starting teaching an after-school game design and programming class at Kamala Khan's high school. One day when taking the class through a computer science exhibition in New York, some A.I.M. agents attack the museum, leading both Doreen and Kamala to suit up to take them down. They defeat the agents, but the reader soon learns that the purpose of the attack was to scan the crowd there for superhuman abilities, and abilities were detected in Kamala's ostracized classmate Ember. We quickly find that Ember is secretly an Inhuman with the power to create portals that summon video game-like characters from other dimensions, an ability that interests a certain "KingOfPWN".

Soon Doreen and Kamala must work together to stop Ember, who has been manipulated into becoming a super-villain known as Emulator by KingOfPWN, who has promised to help her better understand her powers. As the danger that results from Emulator's actions grow, fellow heroes America Chavez and Inferno find themselves coming along for the ride.

The limited series began with issue #0, which was released for Free Comic Book Day 2018. Confusingly, each subsequent issue was released as Marvel Rising: [subtitle] #1.

In 2019, another five-issue limited series began release, also titled Marvel Rising, or "Heroes of the Round Table". Ms. Marvel, Squirrel Girl, Inferno, and Spider-Man (Miles Morales) are on a campus tour when a bunch of people enthralled by Morgan Le Fay start kicking up trouble. As the heroes deal with the thralls and make their way toward Morgan, they are joined by Quake and America Chavez. Meanwhile, Morgan takes over New Attilan, the home of the Inhumans, to make it her new throne.

After which the series just kinda fell by the wayside with nothing new or no news having come from it since then, with it presumably having be Quietly Cancelled by Marvel to focus on other titles.