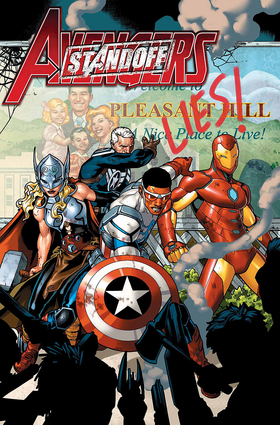 Not so pleasant...
Advertisement:

Avengers Standoff is a 2016 Bat Family Crossover published by Marvel Comics, told across the Avengers line of comics in the All-New, All-Different Marvel universe.

Pleasant Hill seems like an idyllic community on the surface, but when a deadly secret comes to light, even the combined might of estranged allies Steve Rogers and Sam Wilson —the Captains America of past and present— can't keep it contained.

While the following issues also tied into the story:

As with other crossover events, Standoff will result in two notable changes to the Marvel Universe status quo: Steve Rogers' youth will be restored and he'll return to the Captain America mantle (alongside Sam Wilson), while a new Thunderbolts team —led by the Winter Soldier— will emerge.

Though similar in concept, Marvel has claimed Avengers Standoff is completely unrelated to Civil War II, which was set to launch immediately after this story concludes.