Spoilers for the first issue are unmarked. 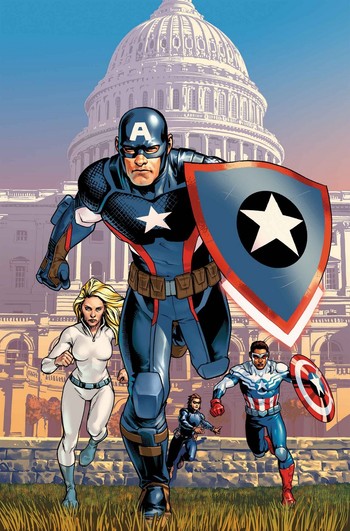 Prior to Secret Wars (2015) Steve Rogers, the original Captain America, had the Super Soldier Serum drained from his body and he reverted to his original age. Due to this, he handed over his shield and the title of "Captain America" to his best friend and long-term fighting partner, Sam Wilson, who became the new Captain America. They fought against HYDRA and the Red Skull Secret Wars and All-New, All-Different Marvel relaunch happened.

Then, after seven issues of Captain America: Sam Wilson, Avengers Standoff happened and Steve Rogers was restored to youth, super soldier serum intact. In the wake of Standoff, Steve and Sam decide that it's okay if there are two Captain Americas.

So now armed with a new shield and youth, Steve goes back to work for S.H.I.E.L.D., with Sharon Carter and Rick Jones, going up against the rejuvenated grassroots of Hydra and a telepathic Red Skull. And so while on a mission to take down Baron Zemo, Steve shockingly pushes Jack Flag out of a jet, and utters two words no one ever expected to hear from him:

It is written by Nick Spencer and illustrated by Jesús Saiz.