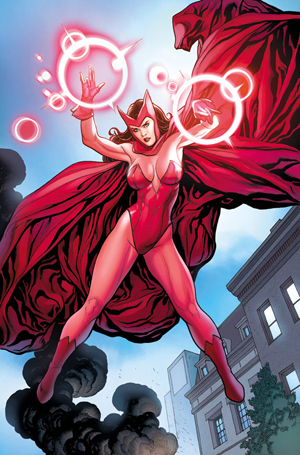 My mutant ability is to create chaos. To make the improbable a certainty. Sometimes all of this negative energy sends my head spinning too. Sometimes I feel as if I can do nothing but perpetuate the unnatural. But the Avengers are there to keep me grounded. To bring order into my life.
— Wanda Maximoff, The Avengers

Scarlet Witch is a Marvel Comics character, known as a longtime member of The Avengers and as the instigator for several arcs like Avengers Disassembled and House of M. She first appeared in X-Men vol. 1 #4 (March, 1964), created by Stan Lee and Jack Kirby. Wanda Maximoff, daughter of Erik Lehnsherr/Max Eisenhardt (a.k.a. Magneto), was born with magic-like mutant powers. With her twin brother Pietro (a.k.a. Quicksilver), she was raised in the Wundagore Mountains by Romani. As it turned out, Wundagore served as a prison for the Elder God Chthon who imparted a fraction of his power to Wanda so that she might one day serve as his vessel. Eventually, she and Pietro were unwillingly recruited into the Brotherhood of Evil Mutants by their father (though neither he nor they were aware of their relationship at the time) through the life debt they owed him after Magneto saved Wanda's life. For a while they were both enemies of the X-Men, but eventually Magneto was imprisoned and, having nowhere else to go, Wanda and Pietro applied for membership in The Avengers along with another ex-villain (Hawkeye/Clint Barton). Captain America accepted them, as the roster was then empty (except for himself), leading to the second incarnation of the Avengers (if we consider the first one to be the founding members plus Cap), which came to be known as "Cap's Kooky Quartet".

Initially, she had a mutant power that was simply referred to as her "hex power" which was basically her pointing in some direction, and some sort of unfortunate event would occur; the name was derived from what the villagers whom Magneto saved her from called her, rather than explicit magic power. This was eventually clarified into the mutant power of "probability". In time, she began to study actual magic with Agatha Harkness, a real witch, and became in truth a witch. During Kurt Busiek's run, she learned that her probability manipulation was fueled by "chaos magic" and learned to tap more deeply into the magic, establishing herself as one of the most powerful Avengers.

Wanda fell in love with and married The Vision, the Avengers' Ridiculously Human Robot, and even had children. Eventually, the marriage fell apart when the Vision was dismantled, lost all of his emotion, and the children were discovered to be unreal. Wanda had used her powers to conceive with the android, and give birth to twin sons, only to later find out that she had drawn on the demon Mephisto's magic, who proceeded to erase their existence. The time-traveling villain Immortus claimed he had set up all these events, including her marriage to Vision, with the goal of driving Wanda insane, since she was the "living anchor of reality" of her universe. He intended to use her to reshape reality to his will, but the Avengers stopped him. Agatha Harkness then suppressed her memory of her children, and it seemed she could move on.

Alas, it wasn't meant to be.

While discussing just how complicated having kids would be for a superhero, Janet/the Wasp slipped up and briefly mentioned Wanda's "kids" to her, leading Wanda to discover the truth and consequently suffer a breakdown. Thus began the arc of Avengers Disassembled, where Wanda lost control of her powers and unconsciously killed off several Avengers, including Vision and Hawkeye, without being physically present — she spent most of the arc being kept company by illusions of her children until the Avengers came to confront her. She was eventually taken out by Doctor Strange, only for Magneto to come and take her to Genosha to atone for his neglect. Her rampage destroyed the Avengers, since they couldn't go on after to the damage she had caused.

Captain America and Iron Man founded the New Avengers and were about to move on, until...

In Genosha, Xavier attempts to help heal Wanda, to no effect. Feeling she is beyond his help, Xavier calls in the X-Men and Avengers to decide on Wanda's fate; before coming to a decision, they decide to see what Wanda herself wants. Pietro, overhearing that this meeting had been called, feels this can only mean they are coming to execute his sister, and before the Avengers and X-Men can arrives, convinces her of a different path: to use Xavier's mind and Wanda's power to rewrite reality and give the people they love their greatest wish. Reality is changed, and mutants become the dominant species, with her family—now the House of Magnus—the ruling class, but Wanda herself a human, with her children alive and with her. This was House of M (check the main article for the details of what happened).

At the climax of House of M, Magneto kills Quicksilver, driving Wanda into total despair; in her madness, she uttered the immortal words: "No more mutants", and reverted the world back to near normal, with one difference: 99% of all mutants were depowered in an event known as M-Day or Decimation. Subsequently, she suppressed her memories and powers and retreated to a secluded life on Wundagore.

For years, Wanda stayed off the comics, with occasional allusions to finding her, fake versions of her appearing, and the aftermath of Decimation dominating mutant stories, until the 2011 Avengers: The Children's Crusade.

In it, the Young Avengers Wiccan and Speed have learned they may be the souls of Wanda's children, reincarnated into the past. They team up with Magneto to find Wanda and get some answers. She was discovered living with Doctor Doom as his engaged bride, with no memory of her past. In the end, it turned out that Wanda's omnipotence and insanity were caused by a cosmic power source that Doom helped her absorb named the Life Force, and that everything was a ploy for Doom to steal the power for himself. Eventually both teams banded together to defeat Doom and cripple him, but the power was released back where it came from, leaving Wanda unable to break the spell that depowered mutants. The X-Men decided to not kill her and instead let her live as a method to pay for her crimes.

In Avengers vs. X-Men, Wanda initially chose to sit out the war between the two groups after being turned away at Avengers Mansion by Vision. After having a premonition that the Phoenix Force would destroy the Earth, she returned to save her ex-teammates, and eventually teamed up with the "Mutant Messiah," Hope, to help disperse the Phoenix and break the spell that prevented new mutants from being born. Captain America offered her a spot in the Avengers once more, where she joined up with the Uncanny Avengers.

After a crucial moment during the AXIS event, Wanda (and Pietro) learned that Magneto wasn't their father, as they'd believed for many years. What's more, they discovered they weren't mutants either—rather both simply humans who were genetically altered by The High Evolutionary after their birth. Unusually for a Retcon like this, the jury's still out on whether it will be permanent (it was quite transparently an executive move to downplay the X-Men and mutant relationship of the Maximoff twins in the Marvel continuity, due to the movie universe).

Following the Secret Wars event in 2015, Wanda headlined her first ongoing title as part of the All-New, All-Different Marvel initiative. Although this title was cancelled after 12 issues, in it, Wanda learned that she was the descendant of a long line of Scarlet Witches, making her a Legacy Character. After her series finished, she rejoined the Uncanny Avengers.

Wanda entered the Marvel Cinematic Universe in Avengers: Age of Ultron (after having a mid-credits cameo in Captain America: The Winter Soldier), where she is portrayed by Elizabeth Olsen. This version's powers were originally displayed as telekinesis and some type of telepathy, but eventually followed the comics in being described as chaos magic and low-level Reality Warping. (Details can be found here). She has appeared so far in the two aforementioned films as well as Avengers: Infinity War, Avengers: Endgame, her own series WandaVision (in which she formally gains the moniker of "Scarlet Witch"), on Disney+, and Doctor Strange in the Multiverse of Madness.

The Fox X-Men movies never formally introduced Wanda before the Disney buyout; at most her name is on the files Mystique sees in X2: X-Men United, and in the Rogue Cut of X-Men: Days of Future Past, Quicksilver's mom asks his younger sister — who does appear in the regular cut — to "go upstairs and bug your sister", implying there is a third Maximoff.

An old witch from the Salem Witch Trials, she became a significant figure in Marvel continuity, protecting Franklin Richards as his nanny and notably mentoring Wanda Maximoff (the Scarlet Witch) in real magic. She was eventually killed by Wanda, who went insane. She also had a familiar named Ebony, a weird cat-like creature that could sense the presence of mystical beings.

She made her live-action debut in the Marvel Cinematic Universe in WandaVision, played by Kathryn Hahn.

Recognized by many names over the centuries, Dian assumed the alias of Declan Dane and was most commonly known as the Emerald Warlock. At the end of World War II, he was recruited by U.S. Army Major Alan Dakor, alongside The Ghost Dancer and Agatha Harkness, to join the Department of the Uncanny and help stop the threat of Hilda von Hate.He teamed up with the Avengers Unity Division to stop the zombie curse being spread from the site of Hilda Hate's first defeat, discovering the source of the disturbance to be Erida, the Goddess of Hatred. In the aftermath; however, the Emerald Warlock killed his teammate Ghost Dancer and revealed himself to be a force for evil, then turning his sights on the Scarlet Witch.