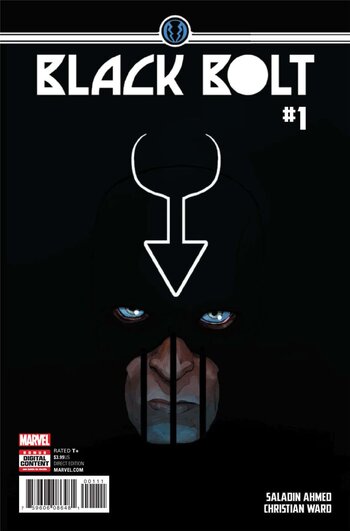 The Midnight King behind bars.
Advertisement:

Black Bolt is a 2017-2018 Marvel comic written by Saladin Ahmed, with art by Christian Ward. It was part of the Resurr Xion relaunch and lasted 12 issues. It won the Eisner Award for Best New Series in 2018.

Black Bolt was the ruler of The Inhumans, husband to Queen Medusa, the Midnight King. But now, thanks to a trick by his brother Maximus, Black Bolt has been locked away in a secret prison facility on the far edge of the galaxy, a place where only the most harden galactic criminals are sent. A place ruled over with an iron fist by the Jailer, a being of immense power.

So, of course, Black Bolt befriends fellow prisoner Crusher Creel, the Absorbing Man, as well as an innocent young alien named Blinky, the Metal Master, and Raava the Un-Skrulled. Together, perhaps they can even escape from this hellish prison.

See The Inhumans for the character.