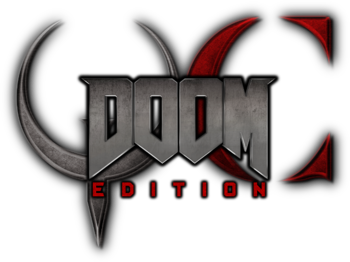 "Sometimes the world doesn't need another hero. It needs a monster."
Advertisement:

Quake Champions: Doom Edition is a Game Mod for Doom created by DBThanatos and Michaelis and released on February 6, 2018. The mod comes packaged with the dedicated Q-Zandronum

source port, which offers Quake-styled movement, improved netcode and a variety of other quality-of-life changes. Other compatible source ports include Zandronum 3.0

It aims to emulate the gameplay and features of Quake Champions, not only porting its arsenal, but also the Champions system: the ability to play as a character with a weight class, an active ability and one or two passive abilities. However, QC: DE brings a new roster of 30 Champions to the fray, as well as the BFG10K, a weapon that isn't present in the game it's inspired from.

QC:DE is primarily a PvP mod, offering a variety of Solo and Team game types including Deathmatch, Capture The Flag, Domination, Last Man Standing, Survival and Freeze Tag. However, the game is also PvE compatible; players can play through almost any compatible Megawad (including the official Doom campaigns) solo or as a party.

QC:DE comes packaged with several monster sets, which the player can enable/disable at their leisure to replace existing enemies spawned on any given map with those from Doom II (the default set), DOOM (2016), Quake I, Quake II and Quake IV. Additional, community-made monster sets are also available for players to download, incorporating enemy rosters from the likes of Half-Life, Marathon and Heretic, to sets that don't even have a representative fighter, such as System Shock and Chex Quest.

The mod can be downloaded from ModDB

. A full rundown of the Champions, their abilities and character-specific tropes can be found in the Characters page.

This game shows examples of note Bear in mind that tropes that apply to Quake Champions may apply here as well.