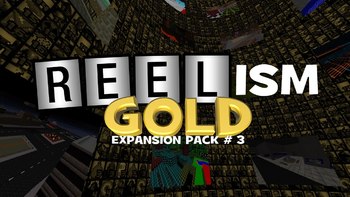 The logo for the third expansion pack.
Advertisement:

Reelism is an invasion-style Game Mod for Doom II by Kinsie of It Runs DOOM!

In Reelism, gameplay is divided into several "rounds" each lasting 60 seconds, with a different combination of randomly chosen slots that affects gameplay. Each of the three reels have different themes to them; the effects in the first reel are basic modifiers such as low gravity or infinite ammo, the second reel either affects what weapons are spawned and ammo dropped by enemies, or transforms the player. Finally, the last reel affects what enemies are spawned during the round, with any surviving enemies remaining even after the round ends. After a certain number of rounds has passed, a boss will appear and the player must defeat it to win the game.

Reelism was first released towards the end of 2011, and has received three expansion packs since. It was also awarded a Cacoward near the end of 2012

At the end of March 2020, Kinsie announced

Reelism can be downloaded here

, while Reelism 2 can be downloaded here

and a copy of Doom II: Hell on Earth to play.

The Tropes are Rolling...