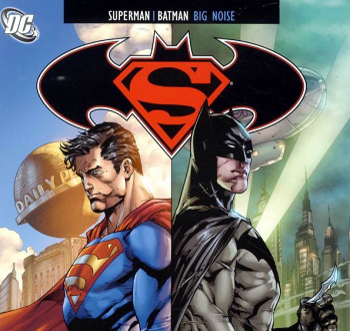 Er... the Big Blue Dark Boy Scout Knight Detective Returns?
A Motif Merger is a stylistic 'beat' sometimes used during a crossover. It's when both 'sides' have certain things that are their trademarks, and (during the crossover) there's a symbolic moment where the two motifs are either swapped or combined.
Advertisement:

Particularly done with characters whose insignia is superficially similar in some way, although as the above example shows this doesn't have to be the case. Can lead to a "Not So Different" Remark if done with characters who play vastly different roles in their original narratives: intentional or otherwise. Very easily leads to Unfortunate Implications if the characters whose symbols get combined come from works that are dramatically different on the Sliding Scale of Idealism Versus Cynicism. Fan Dumb is likely to lead to people reading more into this than is actually there, especially when the two franchises are very well established and have massive fanbases.

A leading cause of Epileptic Trees, particularly of the "all franchises are connected" variety. All Your Powers Combined may come with a Motif Merger.