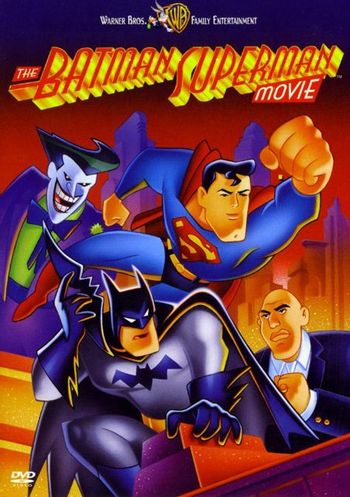 This episode, released on home video as The Batman/Superman Movie, is the first crossover with Batman: The Animated Series, with Batman, The Joker and Harley Quinn appearing in Metropolis.

The Joker has recently robbed an antique jeweler in Gotham, and was last seen outside of Metropolis. Curiously, the only thing he stole was a jade dragon statue. Luckily, Bruce Wayne is currently visiting Lex Luthor as LexCorp and Wayne Enterprises are in a joint project, developing robot drones for space travel. Luthor is interested in military applications, which Wayne disagrees with. Bruce Wayne meets Lois Lane (who had tried asking out Superman until a bank robbery took priority) and asks to take her out on a date, which Clark Kent does not approve of. Lois has even begun thinking of transferring to the Gotham City branch, and plans to talk about it during their date at a fancy restaurant.

It turns out the Joker is in Metropolis. After his Dark Mistress Harley Quinn knocks out Luthor's Ninja Maid Mercy Graves, the Joker meets up with Luthor and offers him a simple deal: "Pay me one billion dollars and I'll kill Superman!" Turns out the "Jade" dragon is actually a hunk of kryptonite someone found long ago. Eventually Luthor hires him, and the Joker sets up a trap by kidnapping Lois during her date with Bruce.

Meanwhile, Batman tracks down the remains of the gang Joker overtook and it leads him to a night club. Superman disapproves of his Jack Bauer Interrogation Technique, and Batman replies by throwing him across the room. Superman, in response, shoulder-checks him into a wall in the blink of an eye, and uses his X-Ray Vision to discover his secret identity. Batman responds with Kryptonite and warns Superman to expect the unexpected. By the time Superman gets home and talks to Lois about her boyfriend, he sees a tracer on his cape, and Batman watching him from across town. Secret Identities have been swapped.

Superman heads off to rescue Lois and moves right into a trap at a LexCorp warehouse. The Joker presents him with half of the kryptonite dragon, but Superman's Kryptonite-Proof Suit holds firm... until the Joker splashes his suit with acid from his flower and begins torturing him in front of Lois Lane, leaving him to die with a time bomb. Luckily, Batman had caught up, arrests the gang, and destroys the Kryptonite. Superman is able to get Lois and Batman out of there before the bomb blows.

After Batman scares the crap out of Lex Luthor, and Luthor realizes the Joker left an obvious clue, he goes to directly confront the clown. While Quinn and Graves have a Cat Fight, the Joker points out that he couldn't anticipate Batman arriving and spoiling his plans. Informing that he still has some Kryptonite left, the Joker doubles the price to kill them both. Luthor refuses and gives him one last chance or the deal is off. The Joker hijacks one of Luthor's robot drones and sends it after Batman after distracting Superman.

Batman and the drone fight across Metropolis, finally arriving at the Daily Planet after hours, where Lois has been up finishing a report. Batman brings her and the drone into the printing press, and gets the drone and his cape stuck in a rolling press. This exposes his face to Lois, who isn't remotely pleased by this development. The drone recovers and is about to skewer Batman when Superman returns from saving a sinking ship and crushes the drone in a single blow.

Luthor has invited the Joker to the warehouse where he was building his drones and his Cool Plane, the LexWing 5000. Why? Because Luthor has decided the Joker is too much of a liability and plans to have him killed, then make up a story about how he killed a mass murdering thief stealing his technology. Instead, the Joker captures Luthor, takes the LexWing 5000 and prepares to destroy all of Metropolis while Luthor has a frontrow seat.

As Lois tends to Bruces wounds, she expresses her frustration that she has been dating a superhero the entire time, especially since she can't publicize the discovery that Bruce and Batman are the same person. As she steps out for more supplies, Superman visits Bruce. With a chance to investigate the origin of the robots, Superman suggests a team-up.

They visit the same warehouse, and are greeted with a fleet of killer drones. Superman fights them off (including the King Mook with the other half of the Kryptonite statue and Mercy Graves as a Human Shield) while Batman flies after the LexWing.

Batman catches up to the plane, breaks into it, and defeats the Joker. Unfortunately, the explosive marbles the Joker carried around start to detonate, blocking off their escape. Superman breaks in and rescues Luthor while Batman bails with Harley. Joker's explosive marbles go off again, and the Joker goes down with the LexWing.

Wayne Enterprises has cancelled the joint project with LexCorp over ethical concerns and controversy, but Luthor is not directly tied to the events. Harley Quinn is extradited back to Gotham and Mercy Graves has the last laugh. Lois realizes her relationship with Bruce would never work out, but she does consider him a friend. Bruce and Clark note that they work well together, but Bruce will return to Gotham to continue what he does best. Before he boards on a plane, he warns Clark not to upset Lois, because "I know where you live."

The episode had a comic book adaptation

that was extremely faithful.