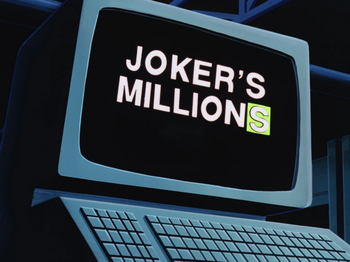 The episode begins with Batman chasing The Joker in an electronics fair. During the chase, Joker and Harley Quinn have difficulties like running out of bullets and their car not having any gas. As soon as Batman and Batgirl catches up to them, Joker makes an escape with the only parachute. This outrages Harley as she gets sent to Arkham.
Advertisement:

Arriving at his apartment, Joker is shown to have money problems, including being late with the rent. He gets the news that he inherited millions from recently deceased mob boss King Barlowe, an old rival, much to his excitement. He begins living large, tossing money left and right, even hiring a replacement Harley (with the real Harley getting even more enraged when she hears about it stuck in Arkham).

Eventually, the Joker's accountant shows up with bad news: the Internal Revenue people want Joker for a massive amount of back taxes owed. Not wanting to go to war against the IRS ("I'm crazy enough to take on Batman, but the IRS? No thank you!"), the Joker starts checking the stash of money he has left... only to find out that while the first ten million was legitimate, the rest of Barlowe's money is counterfeit. Barlowe's will and fake inheritance was all one huge last gag at the Joker's expense, as explained by a final recording Barlowe left to be discovered among his fake millions:

Advertisement:
Barlowe: (on his deathbed) Hiya, Joker. If you're playin' this tape, you've probably figured out you've been had. Yeah, I left you some cash, but only ten million — which, knowing you, you've already blown. All the other stuff, money, jewels, and gold, it's all fake. See, I always hated your guts, and this was the perfect payback. By now, you're probably out of real money, the IRS is after you, and you can't admit I fooled you, or you'll be the laughingstock of the underworld. The joke's on you, sucker! I got the last laugh after all! (laughs, chokes, uses his oxygen mask, still cracks a smile)

Suddenly stuck back at poverty level, only now with the IRS breathing down his neck, the Joker decides on doing what he does best: commit the biggest heist he can and save his hide.

This episode is an adaptation of a 1952 comic.

Harley in the laundry chute

Harley escapes Arkham by going through the laundry chute, something the guards dismiss as being too crazy even for the inmates. We soon see why.

Example of:
Who Would Be Stupid Enough?

Harley in the laundry chute

Harley escapes Arkham by going through the laundry chute, something the guards dismiss as being too crazy even for the inmates. We soon see why.