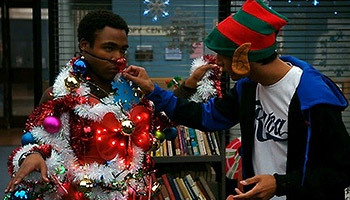 Putting silly things on people who, for one reason or another, are stuck in a particular pose.

The guards at Buckingham Palace, whose duty it is to never move, are common targets for this. However, people under the impression that TV Never Lies will be in pretty big trouble for actually trying this in Real Life.

When it hews closer to "they passed out so we drew on them", it's Face Doodling. When it's messing with someone frozen in time, it's Time-Freeze Trolling Spree.