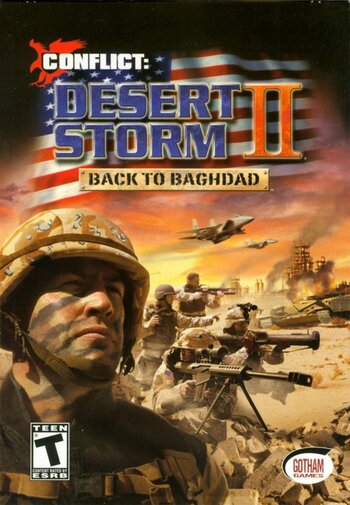 Conflict Desert Storm II: Back To Baghdad is a third person Tactical Shooter game developed by Pivotal Games and published by Gotham Games for North American countries, SCi Games for European countries and by Capcom for Japan and Asian countries as the second game of the Conflict Series. The game served as the sequel of Conflict: Desert Storm. It was available for the Microsoft Xbox, Nintendo Gamecube, Sony Playstation 2 and Windows. The game was released in September 2003 (October 2003 for North American release) for all systems except for the Gamecube, which had a January 2004 release, while North American gamers received it on February 2004.

The game takes place during The Gulf War, like the first game. This time, it does center on military operations set throughout Kuwait and parts of Iraq under Operation Desert Storm. Bradley, Foley, Conners and Jones come back to the game, but operate under the Alpha-One callsign.

The next game in the series is (chronologically) a prequel, Conflict: Vietnam.