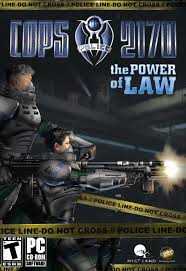 COPS 2170: The Power of Law is a 2004 Cyberpunk RPG / Turn-Based Tactics hybrid, developed by GFI Russia. The plotline follows a young woman called Katy, who joins her city’s police force in hopes of doing good by upholding the law.
Advertisement:

However, she is soon confronted by the reality of policing in the Hive City she inhabits, and is approached by a secret clique of police officers who abandon the written law entirely and only seek to further their own ends. Things don't stand still while she wrestles with the moral quandaries of that decision, and the struggles between the city’s various factions, such as The Syndicate and the local mutants, heat up. Katy can favour one faction over others in her line of duty, which increases her standing with them at the expense of others, and opens up alternate storylines.