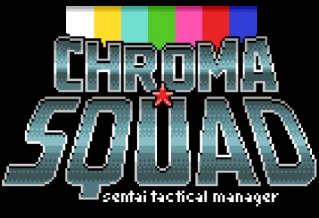 Chroma Squad is an independent game by Behold Studios, mixing elements of Turn-Based Strategy, Strategy RPG, and management simulation. It's a love-letter to the Japanese Tokusatsu genre, particularly the Super Sentai series— more familiar to westerners by its American adaption, Power Rangers.

You take the role of a new, up-and-coming indie studio, managing a Sentai show. Your goal is to create a show exciting enough to draw in fans. After creating your own custom squad of five heroes in colorful costumes, it's time to begin filming. By staging battles against mooks and monsters (the Turn-Based Strategy segments), your audience will grow, and with it, your revenue. Then, by using the money gained from successful episodes, you can further enhance your show's appeal, buying new costumes, materials, special effects, advertising contracts, and more. Exciting battles, cool special effects, and good costumes will bring in more viewers. But if you slip up and produce a bad episode, expect to lose fans. If the ratings fall too low, your show will be canceled.

The game was funded through a successful Kickstarter campaign. Its release date was listed as Summer 2014, but the game was subject to several delays and it didn't make the launch window. It was finally released on PC, Mac, and Linux on April 30th 2015, but backers of the campaign could play it a little bit earlier, on April 28th. It was later released on Android and iOS on May 18th 2017, Playstation 4 and Xbox One on May 19th 2017 and on Nintendo Switch on August 1st 2019. The official website is here.