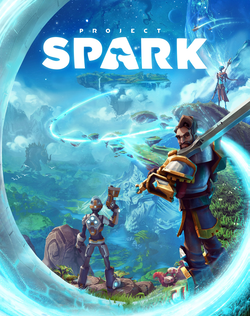 Announced during Microsoft's E3 2013 press event, Project Spark is a Game Maker designed by Team Dakota for the Xbox One, Xbox 360, and PC. While it started off Free to Play, in October 2015 all Downloadable Content was made completely free, and Microsoft Studios ceased to release future DLC. In early 2016, the project was cancelled altogether and taken offline. Players can still play locally saved games, and PC users can use SparkShare

Project Spark as a whole provides examples of these Tropes: