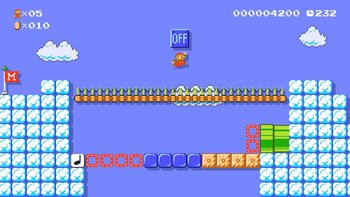 On and off you go!
"Hm? Hm! Hmm... The ON/OFF Switch. No one knows how it actually works. Wireless protocols? Ancient magic? Get to the end of this course, and I'll reward you handsomely, hm?"
— Doctor Gizmo, Super Mario Maker 2
Advertisement:

Sister Trope (and, in practice, an opposite) of Control Room Puzzle.

A Toggling Setpiece Puzzle is, as the name suggests, a type of puzzle that is based on manipulating setpieces or mechanisms whose states (active and inactive, usually abbreviated as on and off respectively) can be alternated during gameplay. This is usually done by pressing switches (or pulling levers) that make all associated setpieces exchange their current states: Those that are toggled on will turn off and vice versa. What makes this trope different from a Control Room Puzzle is that, instead of having multiple switches that need to be pressed in a specific order (or, alternatively, each of them a corresponding number of times) in order to activate a single setpiece (often opening a door so you can continue your progress), here you only need to press one switch to trigger multiple setpieces. Even if there are multiple switches, pressing any of them will do the job all the same.

Most importantly, the setup isn't necessarily restricted to one room. Depending on the game, the state exchange may be carried over to all setpieces in the whole level or dungeon. So if you're in a building and cannot access a path on a specific floor because a certain wall or fence is blocking it, you may later find a switch on another floor that opens it; just keep in mind that some of the paths you traversed to get there may now be closed due to previously-inactive obstructions being switched on, thus requiring you to figure out an alternate path. Conversely, in some cases not all setpieces may be altered by pressing one switch (meaning the wiring isn't global). Instead, the setpieces may be identified by color or a symbol, so you can still tell what switch is controlling them.

If you're playing a co-op game (or a single-player game where you have an AI-controlled sidekick) and this trope is present, expect each character to help the other progress by pressing some switch to open up a path to the other. It's possible, though not mandatory, that this culminates with activating a Two-Keyed Lock.

Lastly, since Tropes Are Flexible, this type of puzzle isn't limited to using toggleable physical obstructions. If you're in an Eternal Engine level with lots of conveyor belts, there's the possibility that pressing a switch will reverse their respective directions. Or, if there are visible electric wires, the switches will toggle the junctions that control where the electrical charge goes; and so on. The possibilities are endless.

If the puzzle's complexity requires it, it's possible that the setpieces can be alternated across more than two states (think, for example, of a cistern or reservoir where you can change the water's level between empty, half-full, and full; or a moving element that can alternate between moving fast, moving slowly and stopping). In these cases, the player will need to stay concentrated on the puzzle or obstacle at hand, or else they'll be at loss easily. It's easy to meet That One Puzzle this way.

Can be combined with other types of puzzle, such as Block Puzzle, Light and Mirrors Puzzle, or even Trick Shot Puzzle, to provide truly formidable brainteasers. Not to be confused with Set Piece Puzzle, which is based on manipulating a single setpiece in some way to solve a riddle. Compare Four-Seasons Level, which operates on a similar basis as this trope, but features changing seasons within the same level to introduce environmental gimmicks; in some cases, it may overlap with this trope. For games where the setpiece you can change between states is the entire overworld (or, alternatively, you're travelling across two versions of said overworld, be it dimension-wise or time-wise), see Dual-World Gameplay.