Note: This page is currently under construction; any contributions are appreciated. Beware of unmarked spoilers. 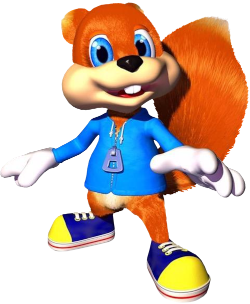 A snarky and cynical squirrel who's trying to find a way back to his girlfriend Berry.
Berri
Conker's attractive chipmunk girlfriend. She's kidnapped by the Rock people and later joins the Weasel Mafia.
Panther King
The current monarch of the Kingdom. A selfish and tyrannical individual obsessed with finding a way to fix the table where he places his milk glass.
Ze Professor/Professor Von Kriplespac
An old enemy-turned-servant of the Panther King and the Creator of the Tediz Army.
Advertisement:
Don Weaso 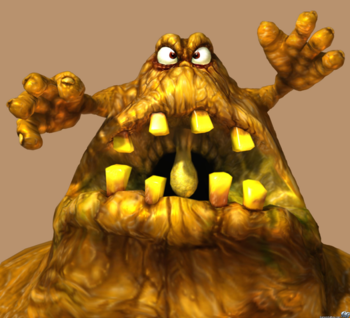 I am the Great Mighty Poo/ And I'm going to throw my shit at you...

A literal living enormous pile of shit. That sings. It Makes Just as Much Sense in Context...

Buga the Knut
Count Batula
A squirrel vampire and an ancestor of Conker. He reveals that Conker is a direct descendant of the usurped squirrel monarchy.
Little Girl/the Experiment
A disturbing Teddyz experiment composed of a giant cyborg Teddy with a little squirrel girl as his hand and brain.
Heinrich
A not-a-Xenomorph-please-don't-sue-us genetically-created alien monster created by Ze Professor.