The cast of Condemned: Criminal Origins and Condemned 2: Bloodshot 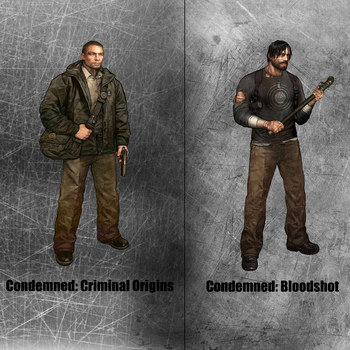 ''Enjoy the scenic route, asshole!''
Voiced by: Greg Grunberg (Condemned: Criminal Origins), André Sogliuzzo (Condemned 2: Bloodshot)
"That's me, Ethan Thomas... Drunk, tired and pissed off. Why? Because this damn city is too fucking blind to see what's killing them... but I can, I've seen the unspeakable, it's out there, and I have a feeling we're about to get better acquainted."

An SCU agent who was framed for the murder of two cops while investigating the crime scene of a high profile serial killer. He spends the vast majority of the game trying to clear his name and track down the real culprit. His only weapons are a tazor, his SCU gear, and whatever he can find in the ruined enviroments around him.

Another SCU agent who believes in Ethan's innocence and helps him by deciphering the various clues Ethan comes across. While she plays a fairly minor role for most of the game she shows up for the library level to assist him in person and give him a taser upgrade.
Malcolm Vanhorn

A mysterious figure who shows up to help Ethan at a few points during the game. As it turns out he is Serial Killer X's uncle and felt somewhat responsible for his actions, which is why he helps Ethan track him down.

The game opens with Ethan investigating one of his latest murders when things take a turn for the worst. His calling card is murdering young women and placing the corpses on display with a male mannequin. Found dead in the department store level, a victim of his own methods.

A serial killer who likes to drive his victims to suicide so that he doesn't deliver the final blow. Kills the teacher who ratted him out to the cops in the abandoned school, but falls prey to Serial Killer X not long afterwards.

The man who killed the two cops at the beginning of the game and framed Ethan for it. He spends most of the game killing other serial killers in the same way they killed their own victims. Ethan manages to confront him near the end of the game but is stopped before either of them manage to kill the other. His ultimate fate is left up to the player to decide.
WALKING SPOILER for Criminal Origins

The Final Boss of the first game who fights Ethan in a surreal landscape after stalking him throughout the rest of the game. Implied to have been involved in almost all of the events in the game in one way or another and appears many times in Ethan's mind before then. Is killed after Ethan removes several metal pieces from its body, crushes its neck, and drops it to the ground from the top of the platform he was standing on.

The director of the Serial Crimes Unit of the FBI. He spends most of the first game trying to convince Ethan to give himself up, believing him to be responsible for the murder of the two police officers at the beginning. The second game reveals that he's a member of the Oro, who wants to try to persuade Ethan to join them.
Agent Dorland

Voiced by: Dave B. Mitchell

A rather aggressive SCU agent in Bloodshot who wears his contempt for Ethan on his sleeve. He's actually a high-ranking member of the Oro who sees Ethan as a threat to their organization, and thus, wants him dead.
Advertisement:
Agent LeRue

A friendly SCU agent who helps Ethan out in Bloodshot.

A hallucinatory figure tempting Ethan to give into his alcoholism and increasingly violent behavior.