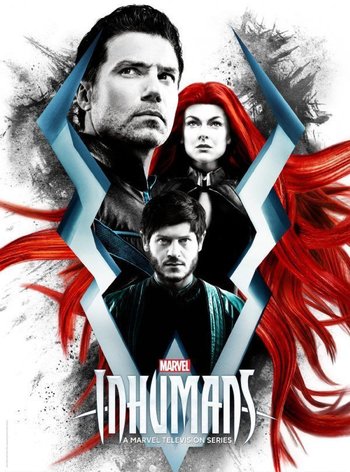 Inhumans is a 2017 television series based on the Marvel Comics characters of the same name, set within the Marvel Cinematic Universe. It debuted in September 2017,note September 1 for a two-week run in IMAX, and September 26 for the show's run on ABC was produced by ABC Studios in conjunction with IMAX, who screened the first two episodes in theaters ahead of its official debut on television. The show ran as an eight episode miniseries. IMAX picked up the tab on the costs for the first two episodes, while ABC funded the remaining six.

The series focuses on Black Bolt and the Inhuman royal family, rather than the "urban" Inhuman characters featured on its sister show Agents of S.H.I.E.L.D., starring Anson Mount as Blackagar "Black Bolt" Boltagon, king of the Inhumans, Serinda Swan as Medusa, queen of the Inhumans and Black Bolt's wife, Ken Leung as Karnak; Eme Ikwuakor as Gorgon, Black Bolt's cousin and leader of the Attilan military; Isabelle Cornish as Crystal, Medusa's sister; Mike Moh as Triton, another of Black Bolt's cousins; Sonya Balmores as Auran, head of the Royal Guards of Attilan; and Iwan Rheon as Maximus the Mad, the villainous brother of Black Bolt. Additionally, Ellen Woglom stars as Louise, a human scientist who meets the Royals.

The series was cancelled after its only season.