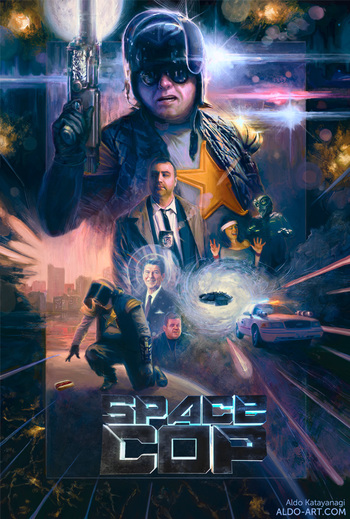 A cop out of time. Out of place. In a world he didn't understand. His name? Space Cop.
"I come from the future. The future of space."
— Space Cop
Advertisement:

Space Cop is a No Budget action/comedy from 2016 by RedLetterMedia. The plot concerns a Cowboy Cop from the future who gets sucked back to modern times Milwaukee and teams up with a cryogenically frozen cop from the 1940s to stop a nefarious alien conspiracy.

The film began life in 2007, but the project was abandoned after a disastrous shoot involving Rich Evans's cat allergy. Production resumed after RLM took off on the internet. To date this has been the RLM crew's only feature-length production made in the "post-Plinkett" years (their previous film Feeding Frenzy was released in the wake of the prequel reviews but principal photography had been completed before them).