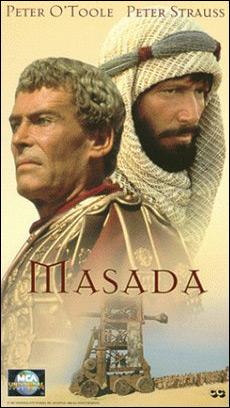 Masada is an American Mini Series that first aired on ABC in April 1981. It is a fictionalized account of the historical siege of the Masada citadel in Israel by legions of the The Roman Empire in AD 73 during the first Jewish Revolts. The series' script is based on the novel The Antagonists by Ernest K. Gann while also using details from historical sources by Roman-Jewish historian Flavius Josephus

The story is set three years after the fall of Jerusalem in AD 70. Flavius Silva, commander in Roman Judea, wants to reach a reasonable compromise with the Jewish Zealot faction known as Sicarii, and withdraw his legion. Political pressure in Rome, however, leads to his besieging the fortress of Masada, the Last Bastion of the Zealots. There the engineering genius of the Romans must fight both the harsh climate and landscape, and the passion and ingenuity of leader Eleazar ben Ya'ir and his people.