Series / Head of the Class 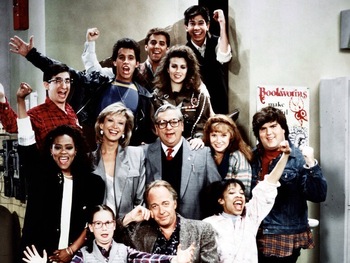 A highly successful Sitcom that aired on ABC from 1986–91. Imagine Welcome Back, Kotter in The '80s and with much smarter students. Or Saved by the Bell in prime time.

Howard Hesseman (WKRP in Cincinnati) stars as Charlie Moore, a substitute teacher who is hired to teach history to a class of Individualized Honors Program students at Millard Fillmore High School in Manhattan. Although Charlie is not gifted himself, he thinks outside the box and is full of epiphanies, and thus has much to teach his class even as he finds himself clashing with the school's stuffy, by-the-book principal. Three months into the show's run, the Very Special Episode comes in where the original teacher returns from his medical leave. This being a successful American sitcom, after spending most of the episode trying to impress the guy, Charlie finally succeeds by being himself; the guy was looking for a worthy replacement so that he could retire. This naturally infuriates the principal further, even as it ensures a stable status quo.

The series ran for five years with almost no cast turnover. This did stretch credulity after a time, but it didn't cause problems until the producers were forced to replace Hesseman with Billy Connolly (as Suspiciously Similar Substitute Billy MacGregor) in the fifth season. The series ended in 1991, and Connolly's character would get a spin-off called Billy which lasted a single season. A sequel series of the same name, starring Isabella Gómez and featuring Robin Givens reprising her role, premiered on HBO Max in November 2021; like Billy, this series was also cancelled after a single season.

This was also the Star-Making Role for Robin Givens and helped launch Dan Schneider, responsible in some way for most every recent live-action hit on Nickelodeon until they parted ways in 2018, and Brian Robbins, who went on to produce and direct shows with Schneider and without (as well as work with the enemy sometimes) and is now the head of Paramount. Unlike Robbins, Schneider has yet to direct a big-screen movie, which may be a wise move.

Tropes found in this classroom include: