Series / He's Into Her 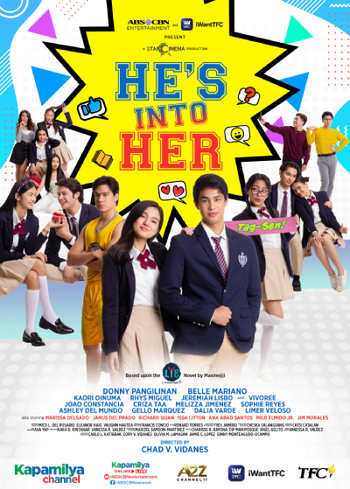 He's Into Her is a Teen Drama series that premiered on May 28, 2021 and airs on Kapamilya Channel, A2Z and TFC. (with episodes posted early on iWantTFC). It stars Belle Mariano as Maxpein "Max" del Valle, a girl from small-town Mindoro whose rich father invites her to move to a cushy new life in Manila. Max reluctantly accepts and finds herself thrust into the brutal world of Benison International School.

Benison is stratified by clique. Max angers Deib Lohr Enrile (Donny Pangilinan), leader of the most popular clique of all. As with many Asian teen dramas founded on a similar premise, this prompts Deib to incite a pattern of bullying against Max. But also... Puppy Love!

The source material is a 2013 Wattpad novel by Maxinejiji. Despite technical issues on the day of premiere, ABS-CBN reported record-breaking viewership rates for He's Into Her. The series was renewed for Season 2 as early as the second week, thanks to the phenomenal success that may prove instrumental to ABS-CBN surviving its franchise loss and becoming a global entertainment company.

BEWARE OF SPOILERS. Character-specific tropes go to the character sheet.

He's Into Her contains examples of the following tropes: