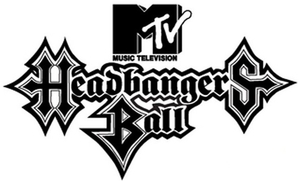 Headbanger's Ball is a music video show that has aired on the MTV networks in various incarnations since 1985. Originally hosted by Dee Snider of Twisted Sister, its most famous incarnation was the Rikki Rachtman era from 1989 to 1995. Airing Saturday nights, it showcased a lot of Heavy Metal acts not seen on regular daytime MTV or mainstream radio, as well as sprinklings of more commercial heavy metal acts and classic metal videos.

The original show was cancelled abruptly in 1995, while the European incarnation continued for three more years. The show was revived on MTV2 in 2003 with Jamey Jasta of Hatebreed hosting, and continues in varying forms until 2012 (although it became merely a music block vice a hosted show, and by the end, a webseries hosted by Jose Mangin of SiriusXM Radio's Liquid Metal station).

The Rachtman era of the show was a fan-favorite for its loose, fun vibe and interviews and music videos from acts that didn't get a lot of exposure elsewhere. The set was also made by White Zombie frontman Rob Zombie (he can be seen in the background painting in several episodes during its creation). The show made several road trips, like going to Tijuana with Anthrax and a water park with Alice in Chains.

Tropes associated with Headbanger's Ball include: