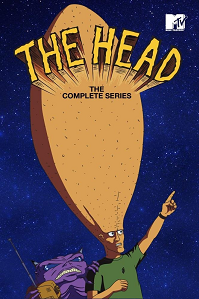 The Head is a animated series that aired on MTV from 1994-1996 about a young man named Jim, who wakes up one day to find his head enlarged thanks to a purple alien named Roy residing in it. Roy enlists Jim in finding a machine that will save Earth from being invaded by a race of evil head-inflating aliens.

The Head provides tropes of: