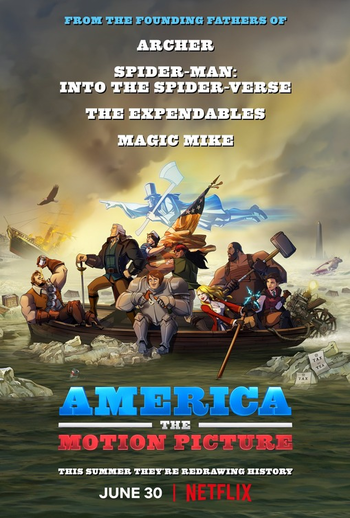 America: The Motion Picture is an R-rated Netflix-exclusive animated film produced by Phil Lord & Chris Miller and released the week of American Independence Day in 2021.

It’s an intentionally comedic and largely fantastical retelling of The American Revolution, set in an Anachronism Stew-drenched alternate 1776; after the traitorous Benedict Arnold (who also happens to be a werewolf in this depiction) storms Independence Hall to steal the freshly-signed Declaration of Independence and torch the place along with its signatories, the British Empire reigns supreme over the beleaguered Americans. It’s now up to George Washington to lead a rag-tag team of alternate versions of various notable people from across American history in overthrowing the British and avenging the murder of his best friend Abraham Lincoln.

Has no relation to America: The Book.