Series / Attack of the Show! 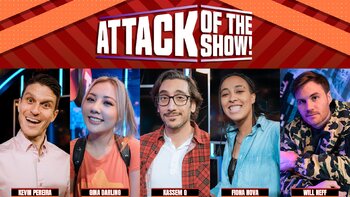 TV's only source for all the stuff you care about!
Advertisement:

One of G4TV's flagship shows, along with X-Play, and one of its highest rated, Attack of the Show! is a daily variety program where the newest technological advances, tech news reports (including some parody reports), and exclusive previews of upcoming and highly anticipated video games, movies and digital media, among other things, can be found. The show debuted in 2005 as a retool of The Screen Savers, one of only three programs from Tech TV, which G4TV merged with in 2004.

The hosts were Kevin Pereira and Candace Bailey note  Pereira would later leave the show in mid 2012 and Bailey along with a slew of guest hosts hosted the show during the remainder of its initial run.; the show was formerly co-hosted by Olivia Munn, and before her Kevin Rose, Sarah Lane, and Brendan Moran. Other personalities who showed up included Kristen Adams, Sara Jean Underwood (who handled The Feed), Chris Gore (DVDuesday), Alison Haislip, Chris Hardwick (Gadget Pr0n), Blair Butler (Fresh Ink), and Blair Herter among others. They also had numerous celebrity guest hosts, who brought their own, uh, unique spin to the show.

It was announced on May 8th, 2012 that Kevin Pereira would leave the show. He left May 31st, though, unlike fellow G4 host Adam Sessler, was given a nice send off.

On October 26, 2012, it was announced that G4 was cancelling both X-Play and Attack of the Show!

. (Like AOTS!, X-Play had recently lost a popular host going back to the TechTV days - Adam Sessler.) Both ended their initial runs on January 23, 2013.

In 2021, after 8 years of being off the air, the show made its' triumphant return in the fall of 2021 along with the rest of G4, with Pereira once again taking the helm of hosting the show, for the first time in nearly a decade, along with a slew of new hosts along for the ride, such as Kassem G., Fiona Nova, Gina Darling, and Will Neff. What's more, Attack of the Show! now has multiple editions of the show — Vibe Check, which is a laid-back version of the show, and the "classic" version of the show that has bits, stunts, and viral videos, to name a few segments, that airs on Thursdays. The Loop, which is a long-form podcast format interview show, did air for a few episodes before sunset.

In September 2022, Kevin Pereira left the show and handed main hosting duties to WWE Superstar King Woods aka Xavier Woods aka Austin Creed. Unfortunately, he would only host for one show before G4 would cease operations in October 2022, ending Attack of the Show! for the second time.

Recurring segments on the show include: