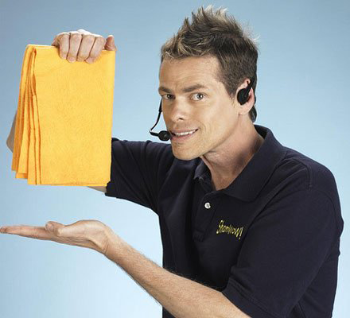 Vince Offer (born Offer Shlomi; April 25, 1964 in Beersheba, Israel) made quite an impression hawking the Shamwow towel and immortalizing the line, "You followin' me, camera guy?" If he had only one commercial under his belt he could easily be dismissed as a one-hit wonder. But Vince soon returned in a new commercial for Slap Chop, where he cheerfully informs us that we will love his nuts. The internet indeed loves him and occasionally gets creative about it.

Then, in 2012, he made his triumphant return with the Schticky.

In 1999, Offer directed The Underground Comedy Movie and in 2013 InAPPropriate Comedy.

By coincidence, bears an uncanny resemblance to Team Fortress 2's Scout. Which was quickly acknowledged in the game.

You're gonna love my examples:

Call now, 'cause we can't edit TV Tropes all day.