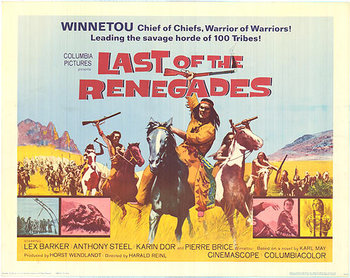 Winnetou II (Last of the Renegades) is a second part, a sequel to Winnetou I from 1964, starring Lex Barker as Old Shatterhand, a hero of the West, and Pierre Brice as Winnetou, his blood brother and noble Apache chief.

While Old Shatterhand is after the evil oil speculator Forrester, Winnetou attempts to gather chiefs of other Indian nations to come to a modus vivendi with the white men. A wedding between Merril (Mario Girotti), a lieutenant of the US cavalry and Ribanna (Karin Dor), the daughter of an Assiniboin chief, is meant to cement the peace. But things go awry and nearly end in catastrophe if not for the timely intervention of Winnetou and Old Shatterhand. Lord Castlepool from Der Schatz im Silbersee makes a welcome second appearance.

Alternative Title(s): Last Of The Renegades