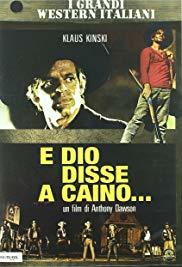 And God Said to Cain... is a 1970 Spaghetti Western starring Klaus Kinski.

Gary Hamilton is a former Confederate soldier released from prison for a crime he didn't commit. You see, his former best friend robbed a train and left his flask at the scene to frame him. His girlfriend then lied and said he did it for the sake of the robbery's money. Now, 10 years later, Hamilton has been released and wants revenge. However, he'll have to blast his way through an army to get it.