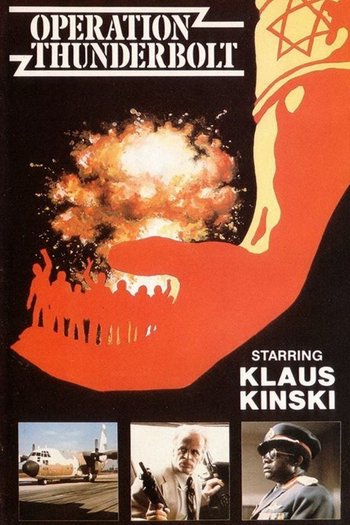 Operation Thunderbolt is a 1977 film from Israel, directed by Menahem Golen, produced by The Cannon Group.

It is a dramatization of the Real Life raid on Entebbe Airport in 1976, more popularly known as Operation Entebbe

. On June 27, 1976, a mixed German-Palestinian terrorist group hijacks Air France Flight 139, en route from Athens to New York after starting in Tel Aviv. The terrorists, led by Germans Wilhelm (Klaus Kinski) and Halima (Sybil Danning) take the plane to Benghazi for a pit stop, and thence to Entebbe Airport in Uganda. After they are welcomed with open arms by lunatic Ugandan leader Idi Amin, they issue an ultimatum. Either the Israeli government and other governments release 53 terrorists in their custody, or the terrorists would start killing the hostages (106 Jews, almost all Israeli citizens) two at a time.

The Israeli government, which held 40 of the 53 terrorists, seriously considers giving in to the hostage demand. But instead, they finally decide to risk a daring raid. A troop of commandos led by Col. Yonathan "Yoni" Netanyahu will land at the airport, kill the terrorists, and rescue the hostages. Netanyahu's men, given very little notice, hurriedly devise a plan for the raid, which is to take place a week after the hijacking and only a few hours before the terrorists are set to start murdering hostages.

The Entebbe raid inspired no fewer than three films within a year of the raid, and was also dramatized in 2018 film Entebbe, and was also a plot point in Idi Amin Sidelong Glance Biopic The Last King of Scotland. Yonathan Netanyahu was the older brother of Benjamin Netanyahu, future Prime Minister of Israel.