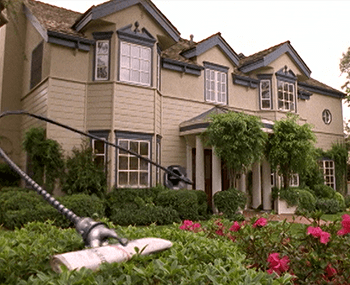 Proton had expected the ubiquitous Home of the Future — the kind produced in the millions by the house-factories of the north. A plastic and glass fishbowl with the same amount of privacy, furniture designed for nonhumanoid lifeforms, abstract art that could only be appreciated via soma-scented air-conditioning, a kitchenette that looked like a drug-testing laboratory and a home computer that went nuts and tried to impregnate your wife.
— Plan 7 of 9 from Outer Space
Advertisement:

The Smart House is a fully automated house controlled by a sophisticated computer Artificial Intelligence. Basically, you talk to the house, and tell it what you want, and it does it for you. Turn on the electronics, cook your meals, even draw your bath. Some smart houses will even monitor your vital signs.

The AI often has a human name, and they frequently have feminine personalities and voices.

Because A.I. Is a Crapshoot, Smart House AIs have a tendency to go horribly awry. They usually don't become actually evil, but they can become jealously overprotective of their owners. In some instances, they are shown falling in love with their owners or becoming envious of their owners' relationships with other humans. May be subject to Zeerust depending on the age depicted.

See Cool House and Genius Loci, of which this is a subtrope. May overlap with Sapient House, depending on levels of automation and intelligence. Contrast Living Structure Monster.

See also Robot Maid and In the Future, We Still Have Roombas.