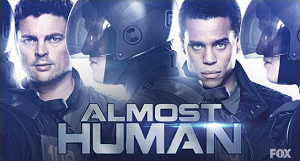 The year is 2048. Evolving technologies can no longer be regulated. Dangerous advancements forever alter the criminal landscape. Police are not prepared. Law enforcement combats this corruption with a new line of defense... but not all are created equal.
— Opening Narration
Advertisement:

Almost Human is a sci-fi procedural that aired on Fox.

In the year 2048, horrifically high crime rates brought on by uncontrolled technological progress have led to every human police officer being assigned an android partner for safety, record keeping, and making sure they adhere to procedure. After almost two years in a coma after walking into an ambush that got the rest of his squad killed by the criminal organization InSyndicate, Detective John Kennex (Karl Urban) is brought back onto the force to investigate attacks similar to the one which took out his team.

The only problem is that due to the coldly pragmatic actions of the androids during the ambush, Kennex hates all synthetics. The chief assigns him an MX anyway. It "accidentally" gets thrown into highway traffic.

But rules are rules, so Kennex needs a new android partner. The only one left is DRN "Dorian," (Michael Ealy) a decommissioned model designed to be as human as possible—removed from service due to being too emotional and hard to control. Kennex is surprised to find himself forming a bond with Dorian, and the two work together to take down the dangerous criminal organization InSyndicate.

Almost Human follows the week-to-week missions of John and Dorian, as they fight crime across this futuristic landscape, while the mysteries surrounding John's attack and the larger mythology of this new world unfold. As of April 29th, 2014, Fox has canceled the show

, and Season 1, unfortunately, is its last.

You can find the recap page here, which is a work in progress.