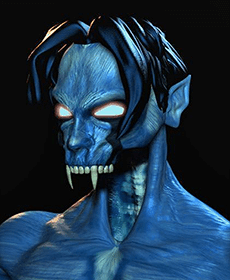 Losing your entire jaw really bites.
A standard way to make monstrous figures appear alien is to mess around with their anatomy in ways that are "atypical" (to put it mildly) of human beings or, more broadly, most real-life animalsnote Emphasis on "most", because unlike what many people would think, real-life biology can be as bizarre as fiction, if not moreso at times. One such trait that always looks menacing and foreboding is the mouth, whether by giving it a irregular or distorted shape, making the teeth within it look hideous or terrifyingly deadly, putting it somewhere where it logically should not be, having there be more than one, or a number of other methods.
Advertisement:

Can be a Sub-Trope to either Bizarre Alien Biology or Body Horror, depending on whether the mouth in question is "supposed" to look like that. Frequently occurs in conjunction with Nightmare Face. No connection to Facial Horror, as that trope deals with injury and disfigurement. See also Good Lips, Evil Jaws.

NOTE: Please only list examples that do not fit neatly into one of the Sub-Tropes.